Learn more about our church, our values and our people

We are a welcoming church with very strong community networks. Our aim is to celebrate and share the Good News of God’s love for us in Christ through worship, teaching, learning, and practical action.

We welcome all ages and all types of people to our services, seeking to be the ‘parish church’ for everyone.

Our church as viewed from the cemetery 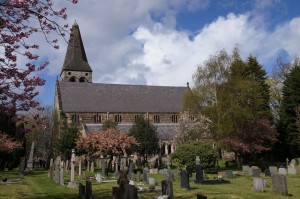 The foundation stone of Christ Church was laid by Mrs William Willis on Lammas Day, 1st August 1857. At this time, Higher Bebington was described as “a township remote from the Parish Church of Bebington above two miles, and contains a most demoralised population of above 600 persons.”

In 2009, the church celebrated its 150th Anniversary, which featured a display of local and church history, and a Flower Festival.

The church itself was consecrated on Christmas Eve 1859, by the Lord Bishop of Chester, John Graham. “At this stage, Christ Church was a ‘District Church’, a daughter church within the parish of St. Peter’s, Rock Ferry and was licensed for baptisms and burials but not for the publication of banns or solemnisation of marriages. In 1877 it became a New Parish in its own right.”

Read more about our building’s history...

The church has four main areas:

The chancel features a carved oak altar, an aumbry to store the reserved sacrament, the church organ and the choir stalls which can accommodate 24 choristers, six in each of two rows on each side. These tend not to be used in main services, but the Friday evening Compline service usually takes place in the Chancel.

The Nave and Aisles

The nave is described as being “clean lined and lofty…with clerestory having seven, three light windows either side, above the pointed arches of the arcades that have alternate circular and octagonal pillars, each made from a single block of stone.” The North Aisle features a Memorial Chapel complete with an oak altar and reredos. This Chapel is used for the 8:00 a.m. Holy Communion service on Sundays. The South Aisle features movable pews for the choir and a Clavinova which is used for Sunday worship.

The Tower and Spire

The tower is built of the same local stone as the rest of the church and forms an impressive porch to the original doorway. The tower features eight bells which are played from a keyboard in the lower bell-chamber.

The present vestry was constructed in 1906, and was dedicated by Archdeacon Barber on All Saints’ Day of that year. It provides space for hanging of cassocks, storage of music, and secure accommodation for registers, current church records and communion vessels.

Historically, the church was served by a Church Hall which was dedicated by the Bishop of Chester during Evensong on 17th September 1952. War building restrictions resulted in the Church Hall being quite a simplified building. This saw much use over the course of the years and was used extensively by a number of church and non-church organisations including various uniform groups.

In 2011, after lengthy community consultation, a new Community Centre was opened. It features a link to the church building and has allowed the introduction of a significant number of new services for the benefit of the wider community, details of which can be found here.

We are delighted that Mike has joined us from his curacy at St.Bridget’s, West Kirby. Married to Sarah and with two children, Mike was a teacher before he was ordained.

Eunice joined us in July 2016 following her ordination to become a deacon. She was delighted to obtain early retirement from Unilever Port Sunlight in 2012 to enable her to serve God, the church and community more fully.

Ted has been a Reader here since 2004. A Reader in the Church of England is a Lay Minister, licensed to preach and teach and help take services. Ted assists with all these on Sundays and Wednesdays and at Baptism services. Ted co-leads a house-group and visits with the pastoral Team and following funerals. With Jill Wright, he heads up the Oasis Mental Health support group. He very often helps with courses such as Alpha or Confirmation preparation.

Jill is also a licenced Reader, since 2007, and regularly preaches and leads services on Sundays and sometimes elsewhere in the deanery. Reader ministry is also exercised in small groups. Like Ted, Jill co-leads the Oasis mental health support group, and has pioneered the popular ‘Knit and Natter’ group, which has been meeting since October 2011. Jill also has a particular interest in supporting Reader activities and is Reader representative both for the deanery and the North West area of the diocese. As such she attends Diocesan Reader’s Council meetings to represent Readers within her remit. Jill also has a particular calling to exercise funeral ministry and is trained and licensed to conduct funerals.

Pam, a Reader since 2002, joined us in 2017 from St Stephen’s in Prenton. Pam is also a Sister of The Order of Jacob’s Well which is an expanding group of communities who share a common vision of studying, preaching and practicing the good news of the Kingdom of God and the Message of the Cross.
Pam has a particular interest in Celtic Christianity and during her years as a Reader has often served as a chaplain on Bardsey Island and has also led Pilgrimages there.

Gary Shaw is a retired Head Teacher having worked in primary schools in Liverpool and Wirral. He has been a member of Christ Church since 1979, a member of the PCC on numerous occasions and is delighted to be Church Warden of the Church that the family has worshipped in for almost 40 years. He currently works as a Liverpool Diocesan Advisor travelling throughout the area visiting many schools offering support when necessary.

Ian has been an active member at Christ Church since 1985. During this time he has served on a number of parish groups including: PCC, Community Centre Management Committee, a member of the parish teenage leadership team, House Group Study leader and Alpha Course leadership team.

June is also a Licensed Lay Minister, holding a licence as a Pastoral Worker; she was licensed in 2006. June coordinates the pastoral care offered by Christ Church. She runs the contacts scheme where people look out for missing members of the congregation Sunday by Sunday and follow up their welfare. She runs the Pastoral Visitors group who call on the sick and housebound, coordinates the Listening Service, and supports the Oasis Mental Health support group. An extension of her duties includes the organisation of the Good News Coffee Morning held monthly. June is also a lay representative for Christ Church on Wirral North Deanery Synod.

It is probably fair to describe Victoria as being "the public face of the church" because she handles all initial enquiries relating to Baptisms, Weddings and Funerals - and much more besides. Victoria produces much of the church’s publicity (newsletter, magazine) and is the first port of call to find out what is happening. She produces all our service leaflets for Sundays and special events.

Working around 10 hours per week, Sarah has a general oversight of the Centre. This includes liaison with Centre users; “on-call” problem resolution; routine servicing and minor repairs; hands-on management of the kitchen to maintain our 5* hygiene rating.
She also has special focus on CCHB led social initiatives.

Julie manages centre bookings, invoicing and payments.
In addition she maintains internal and external Centre noticeboards and monitors Church & Centre websites and social media.
Working around 9 hours per week she is available in the Parish Office on Tuesday mornings (these hours are extended during school holidays to cover for the Parish Secretary)

Take a look at the Community Centre website to see what facilities and activities it has to offer.

Please take a look at our Safeguarding Policies.